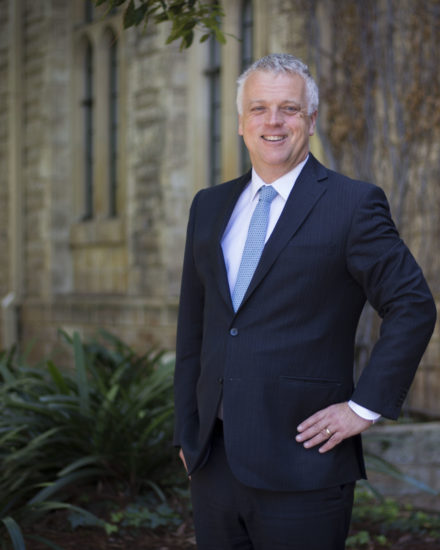 Professor David Sadler was appointed to UWA as the Deputy Vice Chancellor Education in October 2017. He was previously the Deputy Vice-Chancellor (Students and Education) at the University of Tasmania from early 2011 and led many initiatives around infrastructure for education, student experience, curriculum renewal and especially the educational attainment agenda, leading the Children’s University, Tasmania. He served on the Office of Learning and Teaching Strategic Advisory Board; and is an elected member of the Universities Australia Deputy Vice-Chancellors Executive. David led the UA working group on student academic integrity and also the DVC network on the quality assurance agenda and relationships with TEQSA. He is a life fellow of the RSA and a former Council member of the AICD.

As a political scientist specialising in international security, David worked for the UK Foreign and Commonwealth Office as a Senior Research Officer in Arms Control and Disarmament. He had senior academic roles in Social Science at the University of Birmingham and was Director of the Higher Education Academy leading initiatives around student experience and educational excellence across all UK Universities.